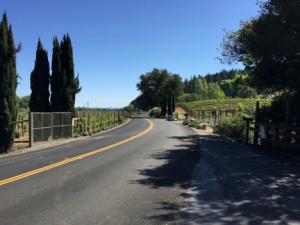 Nancy and I returned last Wednesday from our Second Annual Mauceli Wine Festival – a week of gloriously sunny and warm weather (at least, compared to Rochester in late March 2015) and challenging adventures in wine tasting around Napa and Sonoma Counties. “Mauceli” because of our generous and gracious hosts, Sandy and Bob Mauceli, whom we knew in Rochester before their move west two years ago, and “Second Annual,” because we find ourselves already looking forward to returning a third time next year. Perhaps we’ll say more about the wine tour over on La Vida Gumbo.

Yes, wine tasting was our primary focus for the week, but after riding nowhere but indoors on stationary bikes since early December, I’d have hung myself if I returned home without at least one substantial outdoor ride through some wine country. On our last day in the area, following a tip from freelance travel writer Matt Villano, I rented a Trek Domane 4.5 for a few hours from Wine Country Bikes in Healdsburg. While Nancy and the Maucelis visited (you guessed it) several more wineries in the area, I headed for the back-roads and hills of Sonoma County.

he day was gloriously sunny but windy, with a gusty wind funneling out of the north and down the Sonoma Valley at 15-17 mph late morning and building to 20-22 into the afternoon. Between Strava and the team at Wine Country Bikes, I settled on a route that first took me north and east out of Healdsburg, eventually into Geyserville via CA 128. My strategy was to suck it up and take on the aggressive headwind early in the ride, then surf downwind (well, sort of) back into town.

From Geyserville, I rode north for two more miles and then cut west on Canyon Road over a scenic ridge into the Dry Creek Valley, counting on at least a temporary respite from the wind.

Following a steep but manageable climb to the crest on Canyon Road, there’s a scenic and longer downhill stretch that looked welcoming – but gusts of wind coming up the hill forced me to downshift and pedal against them. Some respite.

Dry Creek Valley is a gem to ride, with two parallel roads rolling over the skirts of the ridges that define the valley and an endless series of vineyards and wineries stretching below. I turned north along Dry Creek Road and headed for Lake Sonoma – upwind again – just three miles away. The Lake Sonoma overlook, I told myself, would be the plum at the end of my first 25 miles. There’d be a picture and a clever Facebook post, of course.

Well, guess again. I got as far as the Lake Sonoma park, passed the visitors center, and headed up the winding, steep road toward the top. I’m a little ashamed to say that I didn’t make it. It’s that steep, and even worse, it seems infinitely long – especially after a 25-mile ride mostly into a stiff wind. After chugging away for about a mile, my legs barking every stroke of the way, I had to stop. Checking the distance remaining on my GPS, I decided that retreat was a better option than collapsing at the side of the sparsely traveled road, and I turned around to head the 16 miles back to Wine Country Bikes.

That said, the ride back turned out to be the real plum. With the wind now at my back, I cruised over gentle rises and falls to Yaokim Bridge Road, crossed over to West Dry Creek Road, and breezed back to Healdsburg.

The total ride clocked in at 39.4 miles, and after a quick shower back at Wine Country Bikes (yes, they seem to understand that cyclists don’t just go back to their home or hotel and collapse after a ride through wine country), I joined Nancy and the Maucelis at the Banshee Wines tasting room in downtown Healdsburg.  The wines were delicious, although I had to bring a bottle of their cabernet home – just to be sure that 39 miles of bicycling hadn’t made me a pushover.